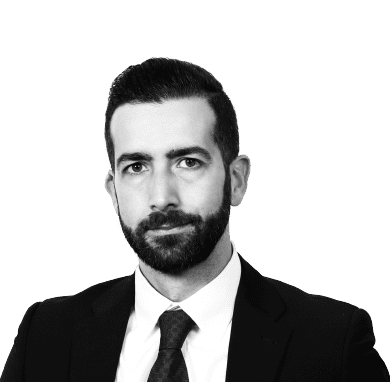 Education: Degree in Law, at University of Sassari.

Giorgio Bianco is a Partner of the Law Firm in Italy where he leads the Sardinian office, the Tunis office and the Lyon Office

He is also a Partner in Tunisia and in France (Giambrone & Partners France Selas).

Giorgio has been a qualified Italian lawyer registered at Bar of Sassari (Sardinia) since 2011.He is also registered as Lawyer at the Bar of Lyon (France) since 2021

Giorgio was previously shortlisted in 2016 by the prestigious legal magazine Top Legal for the award best Italian young lawyer of the year.

Giorgio joined Giambrone in 2012, initially working from the Tunisian office, which he set up, Giorgio successfully strengthened his knowledge of international and Tunisian law. He subsequently provided an invaluable contribution to the setting of the Sardinian office in 2017 as well as setting up a French desk for Italy in 2019. In 2021 Giorgio made a significant contribution to the opening of Giambrone & Partners France, with its first office in Lyon.

Giorgio's expertise and his ongoing work as resident partner in Sardinia assisted in the success in Giambrone winning the coveted Top Legal award as Best law Firm of Italy - Islands.

Giorgio taught law as an expert in immigration law and intercultural mediator in 2017. Giorgio is frequently invited as an expert speaker relating to international law at a variety of conferences, seminars and other events.

Giorgio has been quoted and interviewed in press in several Italian newspapers including interviews on Ansa, Adnkronos, Il Fatto Quotidiano, L'Unione Sarda or Sette (Magazine of Il Corriere della Sera), and in other magazines. Giorgio was also interviewed several times in Tunisian Radio RTCI.